This is the forum for all things Melbourne beats. Post your gigs and other Melbourne music related information here. Keep it about the music and music only, please keep on topic.
Post Reply
31 posts • Page 1 of 1

Now in it's 11th year, Earthdance Melbourne once again offers it's section of an incredible global peace festival. Having taken on feedback from our punters on what Earthdance means to them, its is clear that Earthdance Melbourne belongs outdoors; in the sun and on grass! This year we have taken that on board and found an amazing large grassy venue only 10 kilometers from the city!

This years theme focuses on children and youth issues, as well as the creative inner child within us all. The event will include a giant kids area, a youth drug and health education bus, a circus play space, games and much more. All the artwork will also revolve around this theme, from the chosen acts to the cheeky roving performers. We want to create an environment where you can express your inner child, and thus feel compassion and understanding towards the younger generation.

DONATIONS: We need your help.

One of our site requirements of this year is that we do not charge on entry. In order to cover necessary costs and thus raise more money on the day for our charities, we have set up an ONLINE DONATION SYSTEM. Ten to fifteen dollars is the recommended donation. The event is still officially free and anyone is welcome to come! Your support however really will make a big difference. Thankyou kindly. 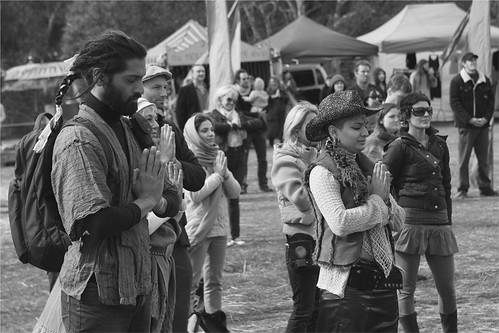 Plus our incredible headline band, to be announced soon. :happydance:


ALSO ON THE DAY:

- Huge outdoor Beer garden, with full view of the stage and the rest of the festival! Coordinated by The Good Brew Co, and featuring organic beer from local microbreweries!

- Magical opening and closing ceremonies- Including the Prayer for Peace, Chanting, Smudging, and children singing. Directed by Portia and Tom Cia.

- Roving and Stage performance art, as well as a circus/play space with mats, circus equipment and teachers

- Healing Oasis- Coordinated by Becca Dakini- with massage and alternative healing throughout the day.

Charities supported on the day are:

lovely that its going back outside, even thought it was a trip down memory lane last year, i dun wanna party at the docks no more

I love this. Missed it that last couple of years.

This years venue is pretty amazing!

Will include some pics once we've announced it.
Top

Also, for those who want to support, Earthdance Melbourne is now on facebook and we would love your help with reaching out to the wider community.

If you want to support, please join and invite your friends to the groups, particulary the event page.

Thanks in advance,
Mick
Top

Soooo looking forward to this year's event.....always a winner

/\ Most likely function one

On another note we are happy to announce another main stage act! :happydance:

One half of legendary Aussie outfit Koolism, Danielsan has more records than you can poke a toned arm at. Known for his ability to drop the most classic tunes when least expected, from Hip Hop to Funk to straight out party rocking beats, Danielsan always gets the dance floor jumping. Expect many beautiful forgotten records mixed with fat modern beats.

oh thats a great venue! Went to 'dont ban the can' there and wondered why its not used more often...

Looking forward....... a week after Ostara and I think we will need this!!
http://www.melbournednb.com

In perfect harmony with this years theme, "Inner Child", we would like to announce that we have just confirmed 2 jumping castles! We are also happy to announce our opening Band for the Main Stage! Kicking off at Midday.

Often classed as Trip-Hop-Rasta-Funk, Pataphysics is a Melbourne based musician/producer dealing with issues from local/international politics, Indigenous Resistance, Dreaming, Eastern philosophy, Life and existstance. The live show draws on elements of Sri Lankan Culture that brings a unique energy to the stage. He is everchanging but based around the present line up of:

yes to bouncy castles - had the best sunday ever on one at earthcore a few years ago.

and yes to pataphysics too

Yep, nice ones - great to see Peebs continue to support the local cool stuff in Melbourne.

will your inner child be doing a performance at this?

6 Days till the Launch! Please come support this great lineup and event. It helps us raise funds which are vital for making the big one happen!


Tickets avaliable from the Info Tent on the day. A huge thanks to the following for their generous donations!

Derek M aka Stryka D grew up in Liverpool Uk and became interested in the music as a youth, discovering a pirate radio station called Toxteth Community Radio that played mostly Soul, RnB, Jazz, Dance music Dub and Reggae during the mid to late 80’s. A friend introduced him to veteran reggae singer Roy Cousins (The royals) who ran a record shop called Cousins Cove in Picton Rd at the time. It was visits to this shop that helped nurture his growing appreciation of reggae music, and after attending London’s Notting Hill Carnival, and experiencing Jah Shaka sessions in Finsbury Park, Derek was enlightened to the soundsystem culture of black Britain and would travel near and far to hear the music. A decade later he Dj'd at the Zanzibar Club in Seel Street, Liverpool. In 2001 Derek migrated to Australia and continues to be based in Melbourne where he has played numerous gigs under the name DJ Uptight at many of Melbourne’s top music venues. He has been billed alongside various international artists including Dub Syndicate with Lloyd Parks, Lee Scratch Perry, Mad Professor, Sly And Robbie, Mykal Rose, Big Youth, Third World, Iration Steppas, Lucky Dube, Luciano, Mikey General, Horace Andy and Bushman to name a few. In 2002 he began to build the Heartical HiFi sound in which today he devotes much of his energy. In 2004 Derek became involved with community radio where he presents Break The Chain formally the Heartical Show on PBS106.7FM.

Boover Banton caught the sound system bug at the early age of 10 years old. Skipping his Friday night boys brigade meetings to attend the legendary Canterbury Sessions in Birmingham UK where in 1972 Quaker City Soundsystem used to host the dance. These where the days when sound system style toasting was emerging with the likes of U Roy and I Roy. Two years later Boover and his family moved to London. A good friend of the family was rock steady singer Roy Shirley who owned Third World records shop in Stoke Newington and the young Boover Banton could be heard toasting to the riddims being played in the shop. Determined to make his name on the sound system circuit he would occasionally touch the mic for Warrior HiFi. Another two years passed and the family moved to Cardiff and this is where Boover’s reputation as a toaster grew momentum and would see him travelling to Bristol, Gloucester and Manchester with his own sound Lion Heart. Later Boover returned to London and made his way up the MC league busting the mic for Intrepid Rebel before gracing the stage with Gemi Magic one of the UK’s biggest sounds at the time. Nowadays Boover Banton lives in Melbourne where he chats on the mic with Heartical HiFi Outernational.

The project started in 2002 when Derek M began to draw up the plans for what was to be Victoria’s first ever custom built dub/reggae soundsystem. It was self funded on a shoestring budget taking many years to build until it was finally ready for play in 2006.
Consisting of custom built audio equipment, a number of speaker boxes and amps, Heartical HiFi boasts the ability to deliver the music like no other. At the heart of the system a special type of pre-amp is used, built by the UK’s legendary soundman Jah Tubbys. This enables the sound system to be played live, and by using extended EQ control, echo, reverb and special effects Heartical HiFi is given its original and unique character. Since its first unveiling, the set has now doubled in size, placing it in the premier league of ultra heavyweight soundsystems.
Heartical HiFi Outernational’s live shows feature the full sound crew in action with Derek aka Stryka D at the controls, DJ Cassawarrior and MC Boover Banton. Delivering the music in fine style, they play only high grade quality selections in conscious reggae and dub music. From vintage classics to latest releases and exclusive dubplate specials, all are forwarded with the anticipation of the mightiest bass line drop! And where their mission is to promote Dub and Reggae music, Heartical HiFi also actively supports the dubstep, DnB and Jungle scenes.
:hug:
Top

Hey guys, well as much as Melbourne needs this rain right now we certainly hope it clears up by Sunday.

The weather predicts only a few scattered showers but we just want to let you all know that we have sourced a massive shelter for the main floor courtesy of Helter Shelters thanks guys!

so rain, hail or shine, the party shall go on!!!

Any idea on set times pls.?
Check out my soundcloud page at:
http://soundcloud.com/nativedog
Mixes and productions by Native Dog
Top